In simple words, streaming a video game is nothing more than just being able to play the game on computer without installing it and having the need to use dedicated hardware. Mostly, without streaming, the computer is the one that "maths" and does all the work so that you could play the game. Due to the requirements of dedicated hardware and "gaming pc", these operations are quite heavy.

While streaming, all the work is done from a distance by several servers belonging to the company which offers the streaming service. Basically, it means that you are able to play any game on any hardware. Including even the most recent game on a very old laptop.

Sounds really good, doesn't it? It's far from perfect though.

Everything has a cost. Firstly, you'll need quite good bandwidth on your internet connection to be able to stream a game, because gaming is "live". There's not an opportunity to pause it like a movie until it buffers so you could start playing again. Additionally, streaming uses more bandwidth for the same quality than a movie. Game runs at 60 frame per second (FPS), while movie runs only at 24 frame per second (FPS). This means that you'll need to download nearly 3 times more data for a game than movie!

For example, let's compare bandwidth requirements for Netflix with Nvidia GeForce Now. They both are famous video game streaming systems.

This bandwidth is still a huge negative factor while considering the average US download speed of approximately 11.9Mbps.

A hybrid system has been developed since not everyone has the privilege to have such connection speed. It allows to stream a game from the main computer on another screen such as TV. You can play the game on your big TV screen with home cinema sound system from your living rooms couch very easily. It's "locally", but is still a video game streaming.

Do you recall how we needed around 50 Mbps bandwidth for video game streaming? Well, we still do, but now - TV, your computer and devices that allow streaming are connected directly. This means data cap doesn't apply at all and the average speed of a WiFi router, the device that links all your "networked" devices together, runs at 500 Mbps. Yes, that's 10 times the requirement! Nevertheless, it will require buying a hardware to attach on your gaming computer and your TV to stream from. Here is an overview of available options:

Stream games from the internet

Geforce Now: this is probably the most advanced and only applicable video game streaming system.

Stream games from your local network

Steam Link: a small box that you attach to your TV that allows you to stream your Stream library from your gaming computer.

Moonlight: an open source implementation of Geforce GameStream. You can easily install it on a Raspberry Pi computer. Once it's attached to your TV, it will allow you to stream games from your PC to your TV.

Geforce GameStream: Usually used in Nvidia Shield systems. Once it's plugged on your TV, it will also allow you to stream games from your PC to your TV. For now, that's about it! I hope this post helped as well as gave you some clarity of video streaming. Do you stream games already and if not, why? Let me know!

Be the first one to find about "What is video game streaming?" and similar articles.

The Razer Stargazer is the best alternative to a green screen on the market for game streamers, but its video … Read More »

Want to look like a real Twitch streamer having a custom graphic or overlay? Well, you don't need to be … Read More » 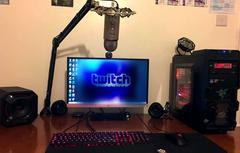 Be the first one to find about "What is video game streaming?" and similar articles.