The HyperX Cloud II is drawing attention for many reasons - its premium build quality, comfortable and modular design, great 7.1 surround and stereo sound, as well as its affordable price. Since it avoids the need for a dedicated sound card, it’s great for laptop gamers.

Due to being attractive for many reasons the HyperX Cloud II sits at the top rung of Kingston’s consumer-focused headset lineup and is the company's best all-purpose gaming headset! Psst, one notch below the "studio" quality Cloud Revolver though.

The HyperX Cloud II gaming headsets biggest selling point is its smart, modular design and optional 7.1 surround sound. This addition adds a USB sound card to the mix that brings virtual 7.1 surround sound whenever you want it. The sound card features volume controls for the microphone and headphones. Also, you can detach the mic from the headset, leaving you with a set of take-away headphones.

There’s no software to install, so the headset is just plug-and-play. It’s ridiculously easy and platform support is very broad.

The HyperX Cloud II works well with both Macs and PCs, and gaming consoles (such as Xbox One and PS4) as well.

However, in order to take advantage of the sound card with its 7.1 surround sound, you will need a USB connection. A large 53mm driver powers each earphone and the surround sound effect is accomplished through software.

On the front, you can find separate volume controls for the mic and the headphones. It’s a great feature to be able to turn down, for example, the mic’s volume without turning down the audio from the headphones. A button to activate the virtual 7.1 sound is found in between the volume buttons, but a small switch to mute the mic is located on the side edge of the controller.

The arm of the mic is flexible and allows you to position it in the exact position you want. It’s also easily removable if not necessary for a while. The microphone offers echo- and noise-canceling for clearer speech.

In addition, there are a couple of extra goodies in the box. Along with the microphone and with the USB cord with audio controls and inline sound card, comes an extra set of ear cups. It features cloth padding that goes with the default leatherette pair. Another extra goodie is a dual 3.5mm headphone jack you can use on airplanes. And the last but not least, Kingston even has added a padded bag which is meant for storing all the extras so they won’t get lost, or you can easily take them on the road with you.

When trying out HyperX Cloud II by connecting the headset to a PC via its USB controller and opening up Battlefield, the closed design completely eliminated surrounding noise, which was super fantastic. Sounds of the game were textured and rich. Gunfire and explosions sounded impressive and crisp, while softer sounds were still noticeable. But when hitting the 7.1 virtual surround sound button, the audio field felt greatly expanded. It gave a better sense of the distance and the direction of the sounds in the game.

Be the first one to find about "HyperX Cloud II Gaming Headset" and similar articles. 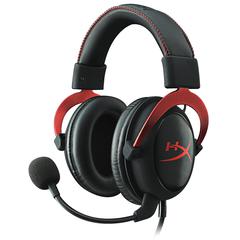 Be the first one to find about "HyperX Cloud II Gaming Headset" and similar articles.