The Logitech G810 Orion Spectrum is an attractive, flexible keyboard with sensible extra features and a fantastic interface.

The Logitech G810 is a gorgeous keyboard with various smart features to suit a wide variety of gamers. It's a piece of hardware that’s well-designed - has an attractive lighting and some very satisfying media control buttons, creating it well worth a look for gamers who prefer elegance over flair.

Logitech's G810 Orion Spectrum is a 17.5 x 6.0 inches big, simple black accessory that is a comfortable fit for most desktops. Despite the fact that it doesn’t come with much in the way of a border or a nice wrist rest, it makes the most of its space. Almost like those of a membrane keyboard, the Orion Spectrums’ keys almost touch the peripheral edges. The design is far from tasteless or flashy, it looks positively dignified, and can definitely be an addition to either a grown-up gamer space or an office desk.

Then again, the keycaps present a bit of an issue. Whether that’s the distance or the height of the keycaps but something interferes while typing.

The G810 avoids using extra keys for the most part, but it deserves a nod for having individually separated media controls.

Users can pause, play, rewind or fast-forward, plus control volume with a roller. As most gaming keyboards simply double up other buttons, this helps set the Orion Spectrum apart from the competition. There's also a button to activate or deactivate the lighting, plus one for a Game Mode that can disable screen-minimizing keys during gameplay.

The Logitech G810 runs on the Logitech Gaming Software, which still continues to be one of the best gaming management programs on the market. With it, you are able to link games to custom profiles, reprogram certain keys and play around with the keyboard’s full RGB backlighting. It’s super simple as the software will scan your system for games and create profiles for them automatically, so all you need to do is choose a color scheme and select any extra commands to the function keys if you like.

As the Orion Spectrum doesn’t have any extra macro keys, it uses an innovative solution with the F1 through F12 keys instead. There’s a possibility to reprogram all of the 12 function keys as any other preferred command - a macro, a keystroke or a program function. You can also create profiles for games.

In addition, options of the lightning are also strong. For example, you are able to individualize each key or make use of the existing patterns. You can also have the keys change color when you tap them.

While hardcore MMO gamers might prefer to have additional macro buttons, the possibility to reassign the function keys should reduce some of their fears.

Be the first one to find about "Logitech G810" and similar articles. 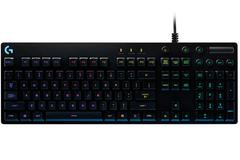 Be the first one to find about "Logitech G810" and similar articles.