The SteelSeries Sensei 310 and Rival 310 are some of the best mice ever, and there’s no doubt that many pro gamers are trying them out. The only real downside is the location of the CPI button and the unbraided cord, but those are pretty insignificant concerns. Both of them are comfortable, accurate, and it's perfect in the way that you can choose either an ambidextrous or right-handed design.

SteelSeries claims its new gaming mice are the first to offer true 1:1 tracking at 3500DPI, and believe it or not - testing supports the claims!

The Rival and Sensei 310 are considerably light (88g and 92g), but it doesn’t mean that they feel cheap. Both mice are slightly smaller than what’s considered average, with the Sensei being a little shorter than the Rival.

They both feature not braided six foot cords, which is quite a disappointment on a mouse that’s high-end. In fact, the USB cords actually look sort of cheap compared to the elegant braided cords found in many other gaming mice.

The Rival and Sensei 310 both feature a "split trigger" design with different areas for both left-and-right buttons, along with another button behind the mouse wheel that allows to switch CPU on-the-fly. A gradual ridge covers the CPI switch on both sides, giving a little protection so you don’t accidentally click it.

Both mice boast Omron switches which are great for 50 million clicks. They are responsive and satisfying, they do not feel too light or too heavy. Also, these mice feature textured silicone side moulding in order to help prevent fingers from slipping during the gaming sessions.

In addition, the multi-color Prism RGB illumination on both mice are identical, and can be adjusted in the SteelSeries Engine 3’s configuration panel. There are 16.8 million colors in a variety of different illumination effects that can be displayed.

Basically, all of this isn’t really something revolutionary in the world of gaming mice, but the big news with these particular mice is the “all-new” sensor, which Steelseries has christened TrueMove 3, which again SteelSeries engineered in collaboration with Pixart (the industry leader). Approved by the company, it is based on the legendary Pixart 3360, but is a custom design that boasts true 1:1 tracking from 100 CPI to 3500, and also utilizes jitter reduction from 3500-12000 CPI. Due to this, the Rival and Sensei can accurately track at speeds up to 350 inches per second.

The software isn’t anything extraordinary, but it’s definitely easy to use, doesn’t use a ton of system resources, as well as opens quickly. The software lets you easily program each of the eight buttons on the Sensei or the six buttons on the Rival.

The 310s’ CPI switch lets the user switch between two presets, which can be configured in the Steelseries Engine.

After extended use the sensor is really nothing short of amazing. It’s flawless, the buttons click cleanly and solidly, and the scroll wheel turns smoothly with no lag. You don’t feel like losing your on the mouse whether that’s during long sessions or fast, sweeping movements. The only downside of these mice is the location of the CPI button, it feels slightly too far back from the mouse wheel.

No matter how good you are at gaming, a good quality gaming mouse always will make a noticeable improvement. To … Read More »

Be the first one to find about "Steelseries Rival 310 and Sensei 310" and similar articles. 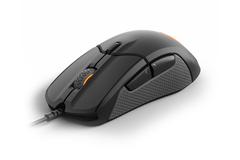 Be the first one to find about "Steelseries Rival 310 and Sensei 310" and similar articles.